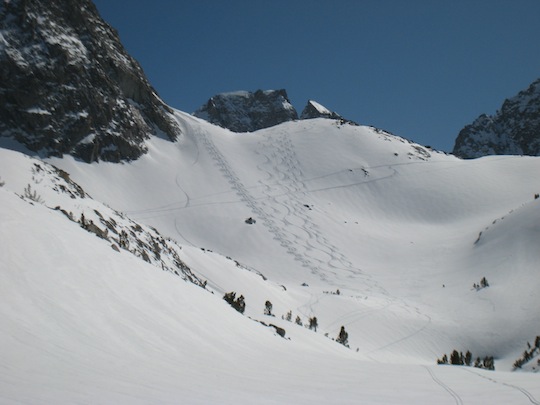 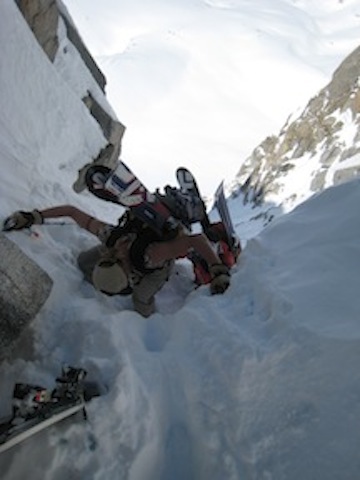 Glen Poulsen showed some friends a few east side classics over the weekend. 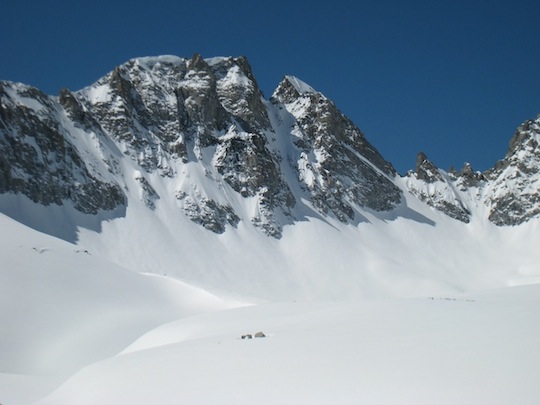 Jonesing for Powder – An AK Virgin Describes the PNH Experience 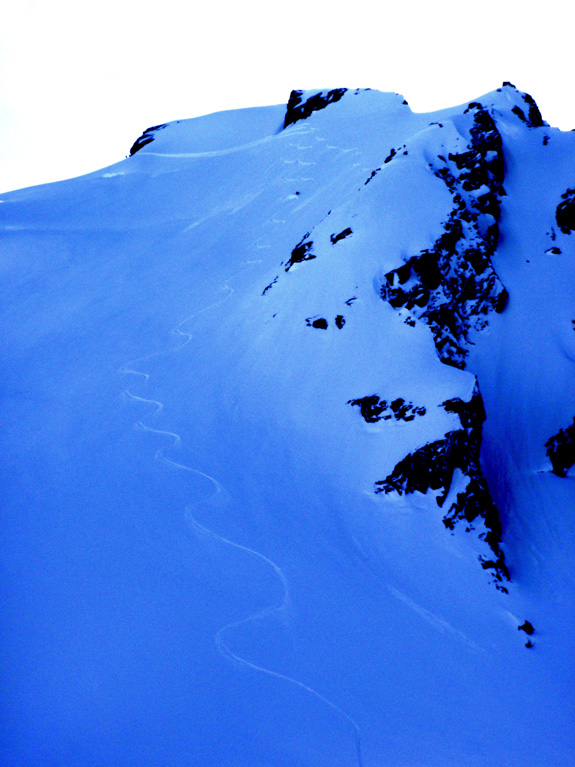 It’s April and I am sitting here having a glass of wine and jonesing for some powder. All I can think about is my recent trip to Points North Heli Adventures and skiing in Cordova Alaska.

Nothing I have seen or stories I have heard can convey the feeling of skiing the Alaskan Chugach. It’s bigger, more powerful and steeper than anything I ever imagined. It is something that one must personally experience in order to fully understand…it is unlike anything else.

Last month I took my first trip to Alaska…the year prior I set a goal for myself. I was overweight and wanted to get into “ski shape”. My goal was to lose 35 lbs and my reward AK. I had achieved my goal of losing the weight and getting in the best shape I knew possible to take on Alaska but was it enough?

I am an average skier. But I wanted to test my ability and take my skiing to a new level. So I booked my trip to Cordova Alaska with legendary skier Chris Anthony from the Warren Miller Team.

Upon arriving in Alaska the Points North Team was very accommodating. I flew directly into Cordova and was picked up at the airport by the one of the staff members from PNH. Points North Headquarters and the Orca Adventure Lodge were just a short drive from the airport. The accommodations turned out to be great. After checking in with the PNH team, they took our photo and handed out probes, beacons and harnesses. The kitchen staff then offered us a hot meal that tasted wonderful especially after spending entire day on a plane.

Before departing from the Sacramento Airport that morning the weather forecast indicated seven days of rain in Cordova which translated to our entire trip. So upon departure I wasn’t feeling very optimistic about the possibility of clear skies. When I inquired about the weather situation Jessica Quinn responded with “Oh don’t pay attention to that…weather here in Cordova changes by the hour”, and sure enough our group had the opportunity to ski three of the seven days while in Cordova.

All skiers staying at the lodge and all PNH crew are required to have in their possession a Motorola Radio. When it’s time to fly the groups are notified via radio to prepare for departure in the staging area. When you get the call for the first time it’s an unbelievable feeling. As one of the skiers described it “this must be what it feels like to come out of the tunnel at the Superbowl”, because it is….It’s the Superbowl of skiing. You can hear Kevin’s “Magic Carpets” warming up outside as your heart starts pumping and the adrenaline starts flowing. As one PNH guide put it “the sound of the heli never gets old”.

The first day of skiing the snow was very similar to Sierra Snow. Somewhat heavy but still wonderful powder. The next day we received over two feet of new snow at the higher elevations. Our second day out was one of the greatest days of my life. The velvet that I have been told about for years lived up to its reputation. It is very forgiving yet the mountains are steep which makes for an unbelievable experience in the most challenging terrain imaginable. The average run that day was about 2200 vertical feet with the longest run of the day being 3200 vertical feet. We were fortunate to get eight runs in that day. As one of my good friends Tom Hicks (and fellow private pilot) said to me after skiing a run called Sweeter Than Wine.. “Chris…It’s kind of like flying huh?” At the time and to this day I have a hard time putting it into words but Tom’s description fit it perfectly.

My advice to anyone contemplating on going would be the following. Make sure to go with a group of four friends that you know well. And when I say “know well”, I don’t mean that you know them well personally. You need to know how well they ski. Can they ski crud? How about wind effect? Can they ski steeps? How are they in the pow? Most importantly are they all approximately the same level of skiers? Ski with all of them in as much as possible prior to going to make sure everyone is of the same ability level. The varying conditions can be challenging. If you go with an odd number of people you will most likely be grouped with someone that you don’t know or that is of a different ability level.

After watching countless Warren Miller and Matchstick films I have always dreamed of skiing in Alaska. Skiing with Chris Anthony and experiencing PNH was like hanging with the band. There is no way to convey in words the feeling or the experience of skiing the Chugach. If you love to ski and you haven’t been…. it’s very simple ….you just have to go.

Get Your Corn (cahnn) Turns Here!

April 19th in the Tahoe Backcountry was velvety corn in the a.m. to gloppity glop in the pm.

Circumnavigating Tinkers in a Heli

This has been a phenomenal ski season.  So good in fact that that when I encountered less than stellar conditions last Saturday I decided to call it quits early and crawl into Squaw Valley’s newest bar, the Slot.  The aptly named Slot is located past the little fenced in patio to the looker’s right of Bistro 22.   This hole in the wall location was once a tiny breakfast deli but has remained empty for most of its life in the Village at Squaw Valley.  No one seemed to know what type of business would work in such a small space.  Someone finally got it right.  The Slot has all the ingredients of a successful dive bar including intimate atmosphere, a local following and solid drink specials.

The Slot is so small that the bar takes up almost the entire joint. A huge flat panel TV located behind the bar displays the latest ski and snowboard movies.  Retired skis hang on walls to the left and right of the bar, nodding to classic ski bum culture.  A jukebox tucked in the corner buttons up the scene with quality selections from the past including Jane’s Addiction, Big Head Todd and the Monsters, and Eric B and Rakim. 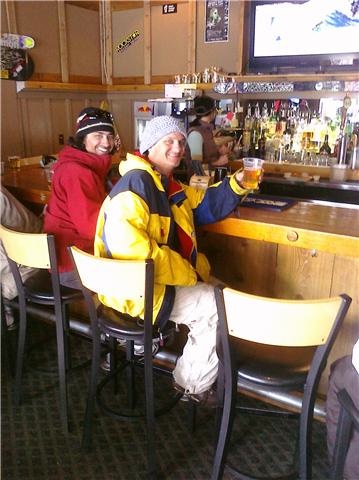 Slot locals hang at the bar 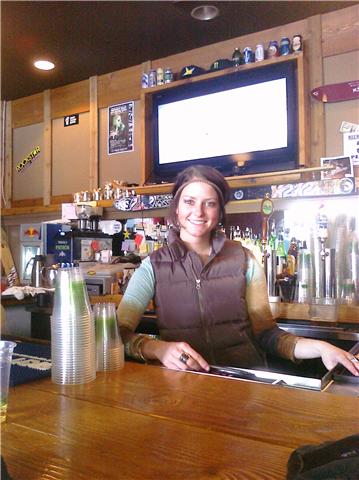 A few bar stools sit at a counter facing the ticket portals at Squaw.  Out front is a small patio for those who actually want to see and be seen, but the Slot is not really that type of place.

The Slot is the perfect spot for local barflies to saddle up and shoot the shit.   It’s a place where you can post up for some quality day drinking without feeling guilty about it.  For a local dive bar to be successful it needs locals and the Slot sticks the landing on this one.  The Slot may be intimidating to the tourist who peeks inside, but that’s just fine with the locals who hang there.  In a Village full of bars and restaurants catering to high-end tourists, the Slot embraces its slogan: “Squaw Valley’s premier dive bar.”  Lacking any formal sign out front save a chalkboard, the Slot is a speakeasy that rewards those who sniff it out.  Hopefully the local clientele combined with an assumed low overhead will allow the Slot to succeed in the typically brutal shoulder seasons.

Let’s not forget the last critical ingredient of a quality dive bar…drink specials.  The Slot features $2 PBR’s (Pabst Blue Ribbon to the layperson) all day, everyday.   The Slot kicks off the week with Mickey’s Monday Madness where Mickey’s Widemouths are $2.  If you solve the puzzle under the Big Mouth bottle cap in less than five seconds you receive a free shot of Jager in the cap.  The Slot also has the local PBJ special where drinkers receive a PBR and a shot of Jim, Jack or Jager for $6.  What more could a local ask for?  Well you could ask for a cute, friendly and efficient bartender.  Oh yeah, the Slot has that too and her name is Missy.   She informed me the Slot is open 3pm to close (around midnight) midweek and Friday and Saturday from 1pm till 1 or 2 am depending on business.

The Slot is a long overdue and very welcome addition to Squaw Valley.  While only locals used to know about the Chamois and Loft Bar, now everyone goes there to après in the sun.  Sometimes it’s better to go somewhere that’s not on display.  The Slot is a little more discrete and off the beaten path.  It’s a place without the pretention of your typical tourist destination.  It’s a place where you can relax, have a drink, chat it up or just chill out.  Locals looking for a new bar to call their own should check out the Slot. 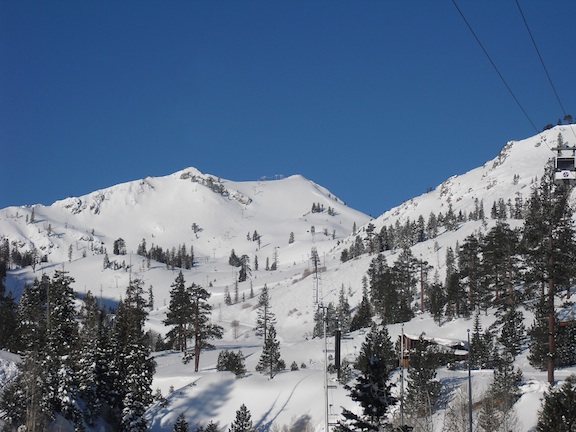 Ask and you shall receive.  Conditions held up as good as possible with all time pow in the Tahoe Backcountry today.  North facing aspects were deep and dry.  Here’s video from a run at 6:15 pm April Fools Day.