We are about halfway through a ski season we knew would be strange from the start. Despite the clutch of Covid, NorCal skiers have much to be grateful for. Ski areas have been able to operate with Covid protocol and the lifts have kept spinning. The skiing has been remarkably good considering we have been hovering around 50% of normal snowfall for most of the season. On the downside, coverage below 7K was thin until late January and a persistent weak layer has been lurking for most of the season. Traffic has been insane on big snow weekends and restaurants have only been serving to go food but those are first world problems, right? An atmospheric river that fell entirely (and atypically) as snow kicked us into high gear at the end of January. A few more refills since then have kept the glass half full.

As fall turns the corner to winter, it’s hard not to ponder what the ski season will bring. To call last year strange would be an understatement.

The 2019/2020 season started off innocently enough with consistent snowfall in December and good ski conditions that prevailed into the new year. Unfortunately the good times did not continue to roll and by the end of January NorCal slipped into a high pressure vortex that would last the better part of two months. Tahoe City received one inch of snow in February making it the driest since 1988. With nary a flake falling from the sky, February 2020 was quite the yang to the record breaking yin of February 2019 which exceeded 300 inches.

Meanwhile, Covid-19 started creeping into the national consciousness. By early March it was impossible to ignore. Given its extremely contagious nature, goals of containment quickly morphed into mitigation scenarios at best. As infections surged, unprecedented lockdowns were instated throughout the country. The North American ski industry took the extraordinary measure of closing operations in the middle of a peak winter weekend. That weekend (March 13 through 15) coincided with the first real snowfall Tahoe resorts had seen in two months. Saturday was a full on storm skiing day and Sunday everything was closed. The following week, stay at home orders kept people from going to work, only permitted to leave for essential services. As storms continued to pound Northern California, anxious skiers started sneaking into the backcountry. For those who ventured out, the second half of March was a surreal, utopic powder experience while the planet went silent. Ski resorts never reopened.

The upcoming ski season seems rife with uncertainty. As temperatures cool down and people move inside, Covid-19 infections are ramping up at alarming rates. Vaccines show promise but world distribution isn’t going to happen overnight. Most ski areas plan to open with some type of Covid plan. Eliminating day ticket sales, reducing or pausing season pass sales, limiting indoor vending and requiring face coverings and social distancing are some of the many tools anticipated so far. Chairlifts will be loaded in family units or singles on opposite sides of the chair. Will these new protocols work? Will the ski season happen, albeit under a new normal? Will ski resorts survive with limited food, beverage and retail concessions? Will rampant infections shut down the entire industry again? Will ski touring become the only option and if so, will unexperienced skiers change the backcountry dynamic? Time will tell. Skiing-blog.com will report what we see. No matter how strange it may be.

The northernmost portion of the Sierra Nevada Mountain Range ends in a stunning yet frequently overlooked region referred to as the Lost Sierra. The Gold Lake Highway (closed in winter) runs parallel to this range of peaks and lakes which is bookended by the spectacular Sierra Buttes to the south and Eureka Peak (formerly Gold Mountain) on the north end. The entire region is rich in mining history and was the epicenter of the gold rush in the mid 19th century.

In the fall of 2014 I hiked the Eureka Peak Loop trail and saw terrain on Eureka Peak and neighboring Mt. Washington that I vowed to come back and ski in wintertime. The ski terrain on both mountains starts at the relatively low elevation of 5,200 feet which makes them unlikely objectives during leaner snow years. That said, the bountiful winter of 2019 stacked the region with a healthy snowpack and created ideal conditions for exploring the Lost Sierra.

I recently hooked up with local Dave Carmazzi and found good snow on the north face of Mt. Washington one day followed by perfect corn on the south face of Eureka Peak the following day. Eureka Peak can be accessed from the parking lot at the base of the old Eureka Ski Bowl or the museum at Plumas Eureka State Park. Mt. Washington can also be accessed from the museum or from Jamison Mine Road. Eureka Peak and Mt. Washington offer relatively easy touring routes and a variety of descents from breezy to rowdy. Both mountains have large avalanche paths (particularly in the Jamison Creek drainage between the two peaks) and should be navigated with caution or avoided altogether during dangerous snow cycles.

The simplest and safest option for storm days or backcountry newcomers is the old Eureka Ski Bowl which has the remains of two poma lifts and a modest ski lodge. The ski bowl is home to annual longboard races which pay homage to the miners who raced huge skis made from timber back in the mid 1800’s.

Plumas Eureka State Park is located an hour north of Truckee via Highway 89 and about six miles west of Graeagle. From Graeagle, take route 506 past Mohawk to the tiny town of Johnsville. About a mile past Johnsville the road dead ends at a parking lot which is a popular starting point for snowshoers, nordic skiers and backcountry enthusiasts of all types. From the parking lot you can skin up Eureka Ski Bowl to Eureka Lake and Eureka Peak.

After a day of adventuring you can quench your thirst at one of several watering holes in the quaint and cozy towns of Graeagle and Blairsden. The Knotty Pine Tavern, Gumbas and the ever popular Brewing Lair are fine locations for sipping a drink while reminiscing the days highlights. If you are heading back to Truckee and want to break up the drive at the half hour mark you can hit Los Dos Hermanos in Sierraville.

After weeks of storms and overcast the sun finally came out and exposed a new landscape in the Tahoe Region.

This ski season is officially off the rails. Three enormous storm cycles have rocked the Tahoe region over the last three weeks, each of a magnitude that would stand out for an entire ski season. The heaviest snow has fallen on weekends and kicked off the first, second and third weeks of the month as “best ski day in a decade” type conditions.

The Tahoe region averages one storm a season which drops three feet of snow in 24 hours. We have received three such storms so far this month. The all time February snowfall record has been broken just over halfway through the the month. Locals are beat down from shoveling and endless snow removal routines. The powder skiing has been all time day after astounding day.

Another week, another storm

Before the snow quality from last week’s storm could decline, another system pounded the Sierra Nevada. Squaw Valley received just under 4 feet of snow in 24 hours. Squaw Valley and Alpine Meadows did not open on Sunday in order to dig out and conduct extensive avalanche mitigation. Both resorts opened nearly all of their terrain at once on Monday morning resulting in a powderhound feeding frenzy. It seemed nearly every local in the region took the morning off and traffic from Truckee and Tahoe City reflected this. Low snow levels with the last two storms have made this an opportune time to pursue elusive ski descents down to the desert floor in Nevada. Don’t look now but even more chaotic weather is headed our way.

This winter went from great to amazing as a four day storm dropped five to eight feet of snow over the Tahoe Region. This one finished with a day and a half of blower pow that resulted in truly bottomless ski conditions. Squaw Valley’s legendary KT-22 opened at noon on Tuesday, February 5 just as the skies cracked bluebird. MSP Filmaker and North Tahoe local Scott Gaffney called it the deepest sunny day he’s ever skied at Squaw. Ski touring was nearly futile as pole plants pushed into the abyss and ski tips were prone to submarining. Cold temps this week are keeping the trees looking like a Dr. Seuss winter wonderland. If one can obtain Nirvana through skiing, this must be what it looks like.

How refreshing it feels to be in the midst of a perfectly normal, average, standard ski season. Feast or famine style winters seem to have taken a hiatus as we chug along with pleasant consistency. A warm and dry November was followed by a snowstorm the first weekend in December and we’ve been in good shape ever since. Storms have rolled through and refreshed the mountains in well spaced intervals. A couple of the larger systems were puking fluffy blower in the early evening hours only to be pissing rain by midnight. Fortunately conditions morphed into wintry bliss within a day or two. If one could complain about anything (and one really shouldn’t), it would be that elevation 7,000 feet seems to be the new normal for snow/rain line. That said, the last storm cycle plastered a good solid base down to 6,000 feet so lake level trail heads are now in play. Advance weather reports are calling for two to three feet of snow this coming weekend. And it’s only January. 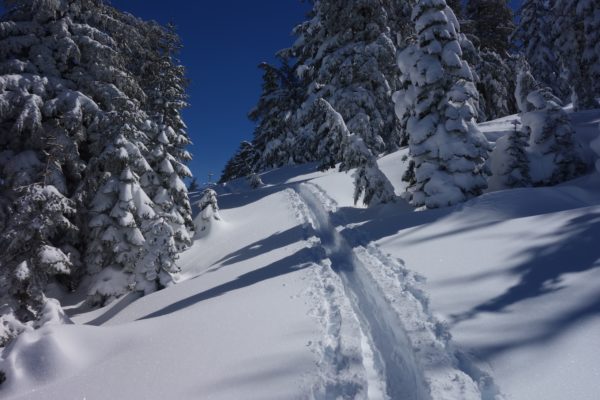 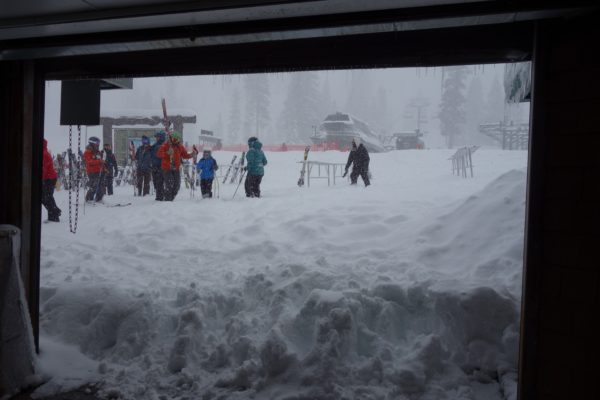 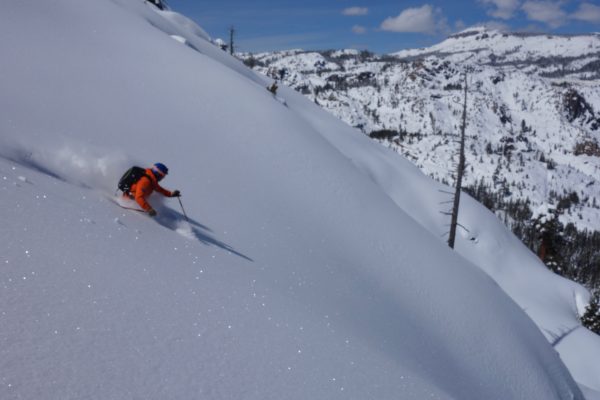 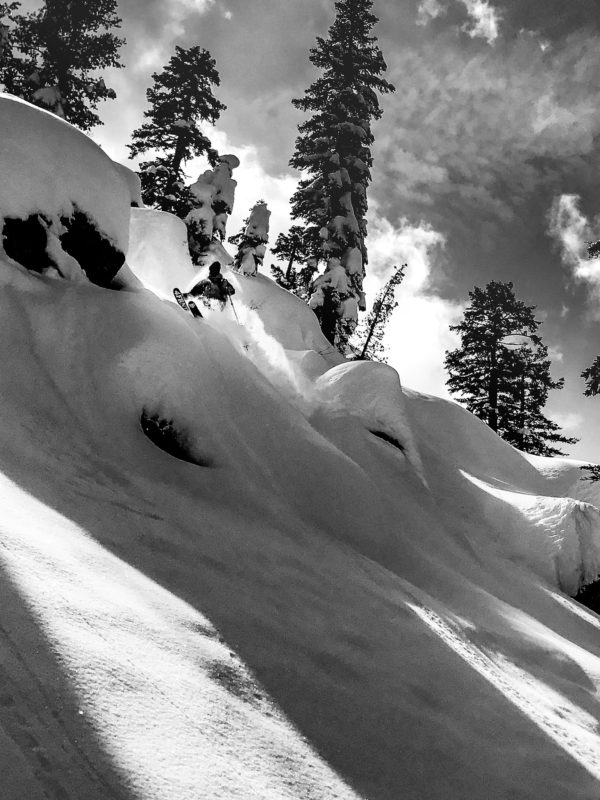 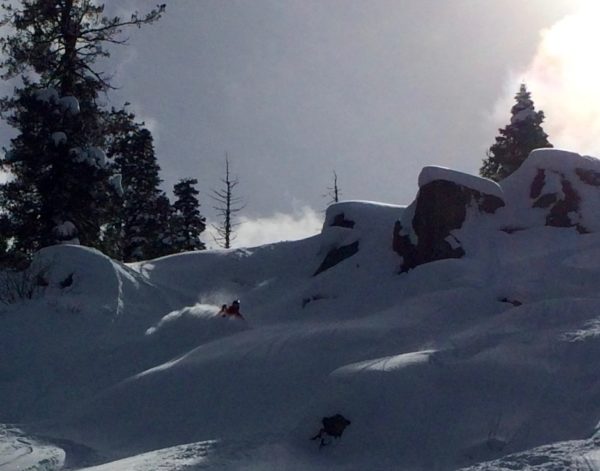 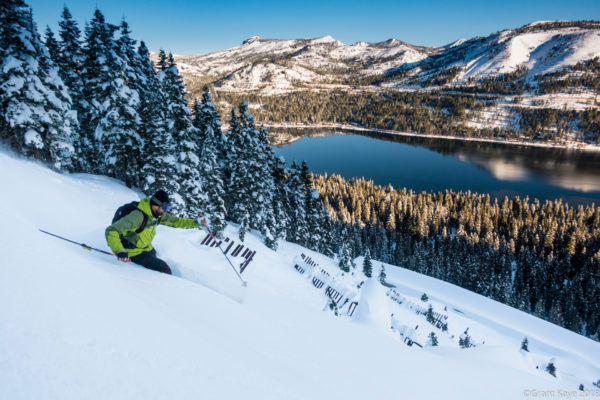 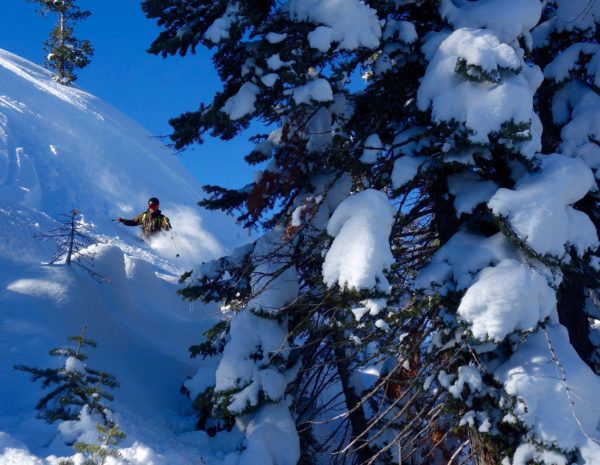 Tahoe riders are celebrating five to seven feet of snow that fell in the last week. The multi day storm cycle started with wet, dense snow and transitioned to ultra light fluff with snowfall rates approaching four inches an hour on Friday night. Valley floors received over three feet of snow finally bringing lower elevation trailheads into play. Conditions have been spectacular though not without hazards that frequently accompany tremendous snowfall in a short time frame. A snowboarder was reported missing at Squaw Valley on Thursday night and found dead Friday morning (cause of death still undetermined). Friday afternoon an in-bounds avalanche below the Olympic Lady chairlift at Squaw Valley overtook five skiers. Some sustained injuries but no-one died in the incident. Backcountry skiers should be aware of a deep slab avalanche problem throughout the region. Large destructive avalanches have occurred over the past several days.

Check out more on this concern the Sierra Avalanche Center: https://www.sierraavalanchecenter.org/advisory 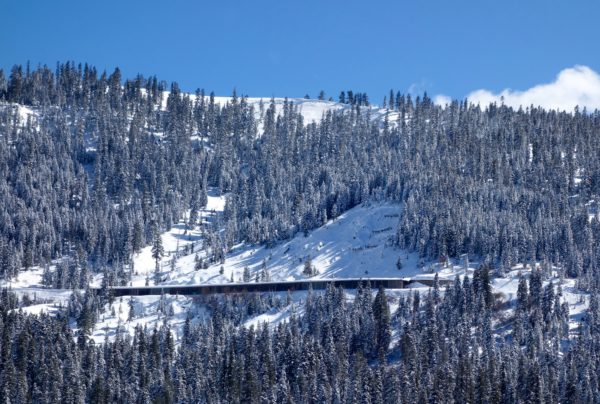 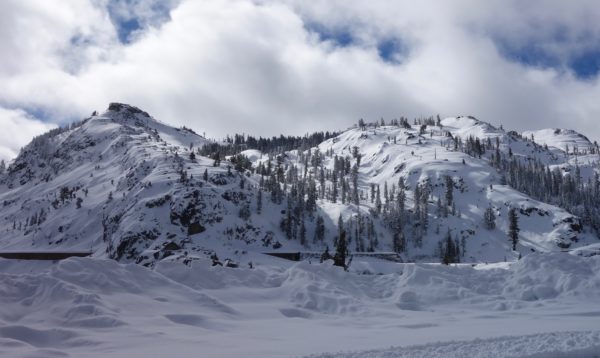 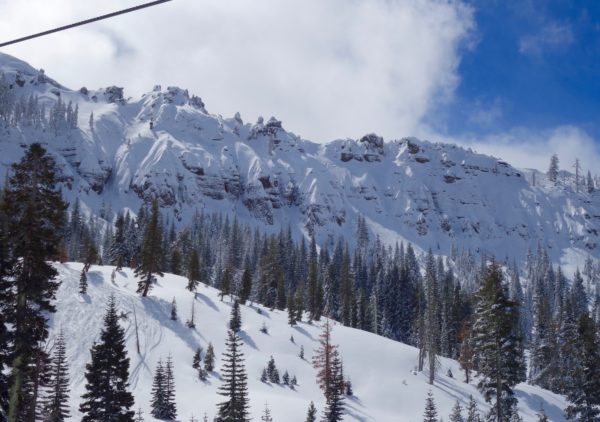 The Palisades at Sugar Bowl. 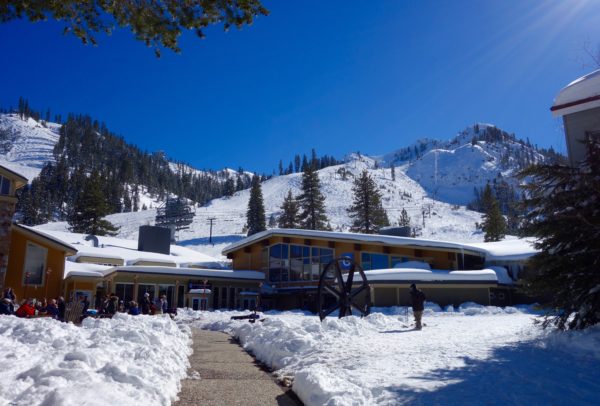 82 inches of new snow has Squaw Valley looking like it’s normal winter self. 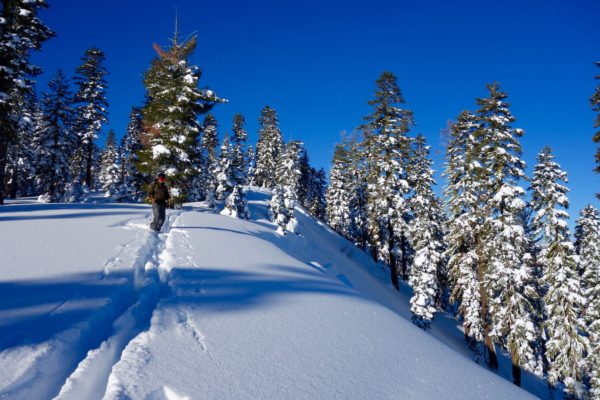 Elevation 7,400 feet was still dirt just a few weeks ago.