Located roughly three hours drive north of Truckee, Mt. Lassen is the southernmost volcano in the Cascade Mountain Range. Lassen was last active from 1914 to 1921. With a summit elevation of 10,450 feet, Mt. Lassen offers many fine options for ski mountaineering. Here is footage from a single day assault of the Northeast Face on June 26, 2010. During our ascent and descent we crossed a large swath of devastation from a massive avalanche that occurred this past winter. Hundreds of trees upwards of forty feet tall were leveled like matchsticks. Reports of the debris began coming in to park officials in late March but the actual date or even month of the slide is unknown. A park ranger informed us they are calling it a fifty year type of event.

The PlumpJack Squaw Valley Inn hosted the first of their summer season pool parties last Sunday. Parties feature food and drink specials on the PlumpJack pool deck and electronic music courtesy of the Electric Ladyland Collective. Electric Ladyland is a Truckee based Burning Man theme camp featuring sound, fire and art. For more information on this dynamic group of artists check out www.electricladylandcollective.org. The next two pool parties will be held from 1pm to 5pm on Sunday, July 18 and Sunday, August 15 (the 3rd Sunday of every month). 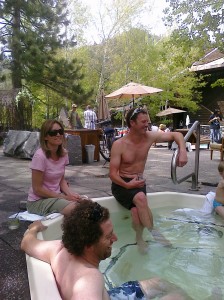 The World Extreme Rock Crawler Championships visited Donner Ski Ranch over the weekend. Different classes of custom fabricated buggies tackled a variety of challenging courses, some of which still had snow. The north side of Donner Ski Ranch was open to skiing while W.E. Rock took over the south side.

Here’s some of the action:

My good friend and neighbor Rob McCormick put out the word in early May.  The email said, “Is any one interested in hitting Mt. Shasta over Memorial Day weekend in an RV?”  Easy decision right? The calendar was marked and plan was made. Credit for the pimpin’ RV goes to Chris Stewart. Chris is toying with the idea of buying an RV and wanted a test run. This trip would be quite different from the standard drive up in the middle of the night, sleep in your car, hike, ski, and drive home afterward while your legs set up like concrete.  This was going to be plush!

Rob picked me up at 7am on Saturday and we were off to Roseville to meet Chris and get settled in the RV.  I originally met Chris earlier in spring while guiding for Points North Heli Adventures in Alaska. I knew Chris had a friend joining us but I didn’t realize until we pulled into the driveway of Tom Hick’s house in Chico that I already knew him.  It turns out I had met Tom the same week as Chris as he was also a guest at PNH. Tom is the kind of guy you don’t easily forget.  He immediately showed us his expedition supply chest that included basically everything you need to stock a full bar.  Exactly what you need when you are going to climb and ski 7,000 vertical fee the following day right?   If you’ve had the pleasure of meeting Tom you will know him for life. This is a good thing because he is about as fun as it gets. Tom and his buddy Mark were ready to roll with another packed car. Chris was a good friend of Rob’s, Mark was a good friend of Tom’s, Tom a good friend of Chris’s and now a degree of separation had come down and Chris, Mark and Tom were now friends of mine. I love it when trips start off this way.

As we closed in on the beautiful volcano we passed by Lake Shasta which I’m happy to report is full to the rim! What a difference one good season of snowfall can make to the state’s water supply! We made the obligatory stop at the Fifth Season climbing shop in Shasta City and loaded up on power treats and other supplies.  We then headed up the road to the trailhead. We parked the RV at Sand Flat as the upper lot was still packed with holiday crowds. Tom said he knew a great place for a pre climb dinner and it was on him so we headed back into town to feast on steaks and wine. Thanks again Tom! After dinner we shifted the rolling palace to a front and center parking spot at Bunny Flat.

We woke up at 3am Sunday morning and after a stiff cup of joe and a light breakfast we were skinning by 4:00. Starting out with head lamps and following some sucker skin tracks, we broke tree line to find ourselves at the base of the Green Butte Ridge, way to the right of Horse Camp. This wasn’t our plan but the idea of losing elevation to meet up with the standard Avalanche Gulch skin track didn’t seem to make sense.  We started up the Green Butte Ridge which offered spectacular views in all directions.   We marveled at the “trail of ants” which was actually a tremendous number of climbers between Lake Helen (el 10,400) and Red Banks (el 13,000).  Most climbers take two days to ascend Mt. Shasta and establish camp at Lake Helen before making summit bids the following day.  Our crew opted to go light and fast and try for a single day push.  We climbed Green Butte Ridge until we were about 400 vertical feet above Lake Helen at which time we traversed west and joined the Avy Gully thoroughfare.   Our route selection had allowed us to climb the lower half of the mountain away from the heavy traffic in the Gulch. Although Green Butte Ridge takes longer than the Gulch route, it is far more interesting both aesthetically and from a climbing perspective.

We skinned to 12,000 feet then hopped on the staircase toward Red Banks. At this point the altitude began to affect everyone and we began to spread out.  Mark and I stuck together and started to put some distance between Chris and Rob, who also stayed fairly close together.   When climbing in a group it is typically poor form to split up but when in the company of a couple hundred other climbers I think it’s acceptable. Mark and I put skins back on after clearing the Banks and headed up Misery Hill. As we toiled in misery, clouds started forming and two rangers passed us on their way down encouraging us to turn around. We topped out at 13,900 feet looking across the milky plateau toward the summit and made the call to…call it. The idea of trying to find our way back across in a white out wasn’t worth it. Mark was bummed as this would have been his first Shasta summit. As we headed back down clouds engulfed the top of the mountain. Rob and Chris made it just above Red Banks before turning back at 13,000 feet. Tom, bless his heart, aborted at the foot of the headwall and returned to the RV to stock the bar before we got down.

We descended Avalanche Gulch and the skiing from 12,000 to 8,500 was fantastic corn snow. We made huge buttery GS turns for thousands of vertical feet, the kind Shasta is legendary for.  By the time we reached Bunny Flat, most of our party had skied 6,000 to 7,000 vertical feet.  Back at the RV we took off our boots, pulled out the beach chairs and enjoyed cocktails and beers as we watched clouds lift away from the summit. If only we had waited at 13,000 feet for the clouds to magically disappear. Oh well, who knew?

For beta on weather and back side road openings contact The Fifth Season in Shasta City. 530 926 5555 or www.thefifthseason.com

Jason Mack has been a heli ski guide for Points North Heli Adventures since their inaugural season in 1999. He lives with his wife Maura and son Declan in Truckee, CA.

Olympic Valley resident Arne Backstrom was killed in a ski mountaineering accident in Peru yesterday. Our thoughts are with the Backstrom family.  Arne is survived by his brother Ralph and sister Ingrid who also reside in Olympic Valley.  His parents Steve and Betsy live in Washington State.  For more details see these related stories: