The Upside of Rain

It’s been raining for almost three full days and watching the snow shrivel down to a thin, pocked, dirty mound could be depressing. But, in the name of  optimism, we came up with five great things about this late January rain-a-thon.

1. If you’re out skiing it in, the rain is a blast. The snow is always soft and spongy and there’s never anyone else out there to get in your way.

2. This rain will wash away the slick-as-Exxon ice layer that has been plaguing the ski areas for weeks.

3. This rain will percolate through the entire snowpack and eliminate the depth hoar layer that setup early in the season.

4. This rain will make an excellent, well-compacted base layer for the SNOW* that’s forecast for next week.

5. As the temperature drops, and the rain turns to snow, the snow will bond like glue, significantly decreasing avalanche danger on the next pow day.

Today: Rain and snow showers. High near 38. Southwest wind around 10 mph. Chance of precipitation is 100%. Total daytime snow accumulation of 1 to 2 inches possible.

Tonight: Snow showers likely, mainly before 10pm. Cloudy, with a low around 30. Southwest wind around 10 mph. Chance of precipitation is 60%. New snow accumulation of 1 to 3 inches possible.

Sunday: Snow showers. High near 31. West wind around 10 mph. Chance of precipitation is 90%. New snow accumulation of 2 to 4 inches possible.

Monday: Snow showers likely. Mostly cloudy, with a high near 29. East wind around 10 mph. Chance of precipitation is 60

Track your Season at SkiLogs.com

For years, my husband has kept a small calendar in his closet where he marks each day he skis and which of them are powder days. From this, he keeps a running tally of his powder percentage each season. I’m not sure whether he’ll ever abandon the old, simple system, but I recently came across a new website that might propel him into the 21st century. SkiLogs.com lets you keep an online journal of your ski days including the date you skied, the conditions, the weather and the lifts you rode. You can also upload photos from the day, track the exact time that you skied, and note the wind speed and direction. The site also has a vertical calculator for Squaw Valley; enter the lifts you skied and the number of laps on each and it calculates your vertical for the day. 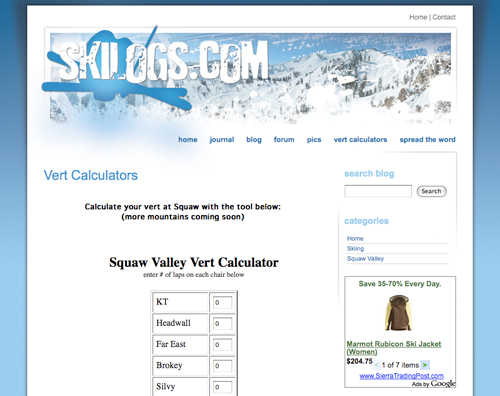 A few friends and I rallied for a quick tour up Silver Peak in Squaw Valley on Sunday morning.  A nice skin track made for a fairly quick approach on the ridge to the lookers right of Silver Peak.  Once on the ridgeline we found fantastic cold powder on the northeast aspects and skied about 500 vertical feet of the good stuff.  We then skinned the ridgeline west to the summit of Silver Peak and descended the southeast facing slopes back into Squaw.  The conditions were slightly sun affected pow on top of a firm bottom layer…still quite manageable.  Perhaps the best thing about this tour is the phenomenal view of Squaw Valley.  You can see virtually all of the quality terrain at Squaw, not to mention the backside of Broken Arrow and a birds-eye view of Tram Face.  The vertical gain on this hike is 2,200 feet to the peak which is higher than both KT22 and High Camp. -Rob McCormick 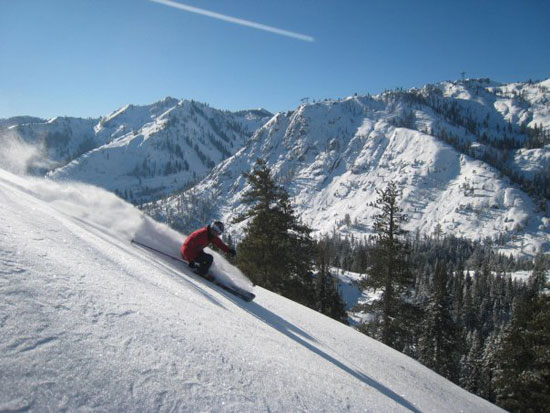 Robb Gaffney with Squaw Valley in the background. Photo by Matt Berry. 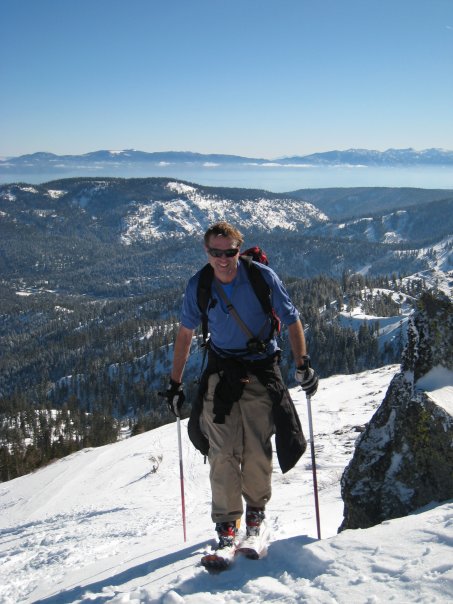