Tecnica introduces the 2012-2013 Cochise Pro AT ski boot. Performance oriented, extremely light and Dynafit compatible (of course). The authors of SBDC hope to get into a pair of these things soon and will write a subsequent review.

Here’s an exclusive look at this new boot courtesy of Marshal Olsen and Blister Gear Review: Tecnica Cochise Pro AT 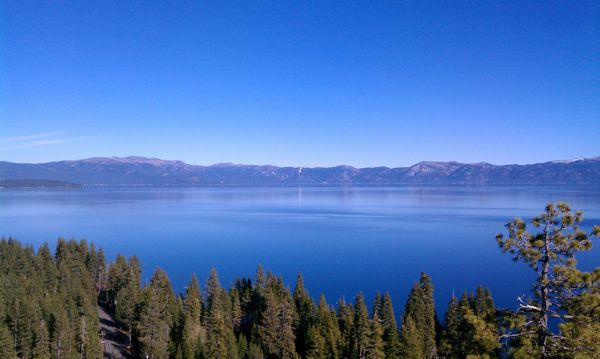 November 29 was dead calm on Lake Tahoe. It was a great day for paddleboarding or boating. Conditions will change radically today and tomorrow as a cold front moves in with very high winds but little or no precipitation. Thursday should be a nice day for surfing on the Lake. Long range forecasts look promising for the storm door to open around the middle of December. The beauty of living in Tahoe is that when the going gets good, we are right here to get it. The 1995-96 ski season had virtually no snow until mid January at which time a two week storm cycle rolled in and paved the way for an abundant and fruitful winter. 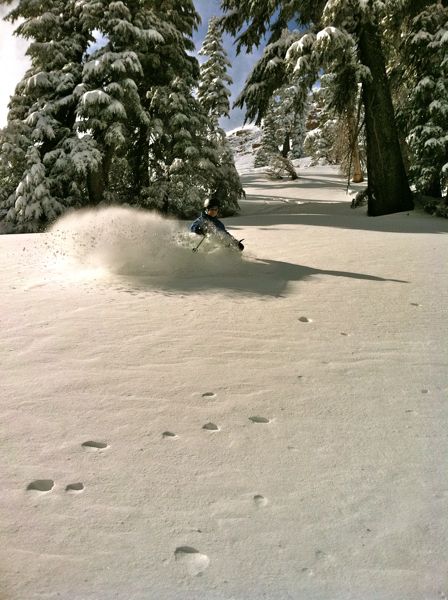 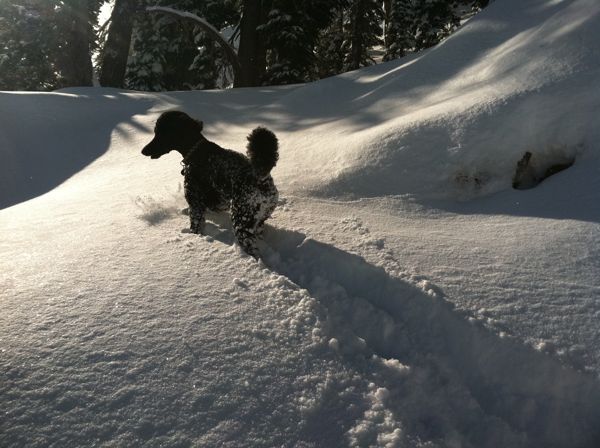 Dawgs of Wintah taste testing the snow at Alpine Meadows.

Freeskier Jamie Pierre was killed in an avalanche at Snowbird Utah last Sunday.  Snowbird is not open for skiing yet but touring is accepted because the ski area operates on US Forest service land.  Pierre was largely known for his massive cliff jumping exploits which tended to overshadow his overall prowess in the sport of skiing which included notable first descents in Alaska and impressive freestyle airs.  Ironically, friends reported a conscious effort from Pierre (38) to tone down his aggressive skiing for the sake of his family.

Here are more details on the accident and Jamie Pierre:

Story of a Man – by Jon Grant

The New Gold Standard – All. I. Can. sets a new precedent in ski filmmaking

All. I. Can. incorporates timelapse photography to create a living, breathing planet intertwined with freeway interchanges that carry blood to and from the beating heart of the Earth. Aerial photography of urban landscapes reminds us of the transition the planet has undergone in the past 100 years without being preachy about it. The athletes are introduced with a creative animation sequence similar to Richard Linklater’s work in The Waking Life and A Scanner Darkly. The music is thoughtfully selected and flawlessly edited.

Oh yes, there is skiing in the movie too. You may even recognize a few names such as Mark Abma, Ingrid Backstrom, Kye Petersen and JP Auclair. The slow motion powder sequences are the most stunning and unique I have ever seen. The film focuses more on human powered access to the mountains than other means. It’s refreshing to see helicopter footage when necessary, such as plucking Kye Petersen off a mountainside that has disintegrated around him, without being gratuitous about it. How many times have we seen a product logoed heli dive into the abyss after dropping skiers off on a knife edge summit? Helicopters ARE cool but do we need to see helicopters filmed from other helicopters? Do we need to see helis in terrain parks so that skiers appear to be flying higher than the copter? Why does a helicopter even need to be in a terrain park sequence? I digress but the bottom line is that ski movies have become brutally redundant and we have become desensitized to even the most spectacular lines and footage.

The Sherpas Cinema crew are extremely talented cinematographers. In 2011 they have come out swinging with a film that will be watched for years to come. All. I. Can. doesn’t just raise the bar for ski movies, it sets a new gold standard.

Check out more on this revolutionary ski film and where to see it next on this piece by Unofficial Networks Backcountry Reporter Brennan Lagasse:
More on All. I. Can. from Brennan Lagasse

All. I. Can. may be purchased (and is well worth buying) on the Sherpas Website:
Sherpas Cinema Website

Shane McConkey loved Bridge Day.  Bridge Day gives base jumpers the chance to huck themselves in whatever fashion they can imagine…legally.  Held on the New River Gorge Bridge in West Virginia, Bridge Day simply rocks.  Here’s a stellar edit from Tim Dutton that features JT Holmes standing in as a member of the Red Bull Air Force and jumping the last of Shane’s unused parachute pack jobs at Bridge Day.

Elevations around 6,000 feet received anywhere from 6 to 11 inches of new snow last night.  That should mean much more on the Pacific Crest.  Looks like round one delivered more than expected.  More snow is expected Saturday evening. 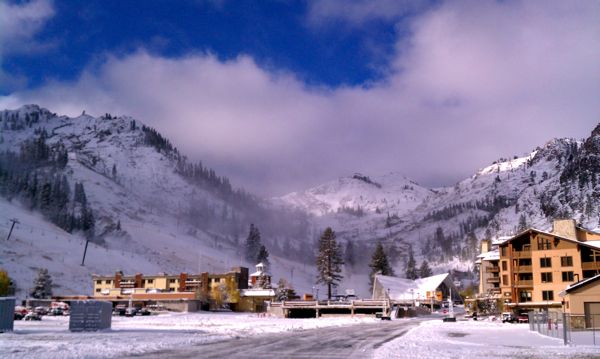 Squaw Valley the morning of November 4. Truckee residences at around 6,100 feet received more snow than Squaw.

Snow removal in the Squaw parking lot this morning.

Ramping up at Squaw – Snow in the Forecast

Lots of activity around the base of Squaw recently. Construction projects in full swing, lifts getting bumped to life and snowmaking to the top of Red Dog. Six inches of snow is expected above 7,000 feet tonight. It may be a tad early to get amped on ski season but let’s not forget the seven feet of snow that fell prior to Thanksgiving last year. 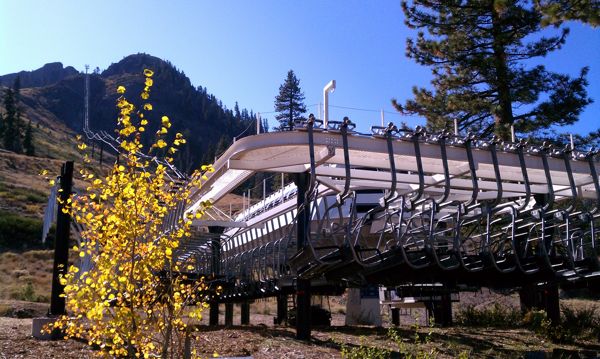 KT getting kicked into gear. 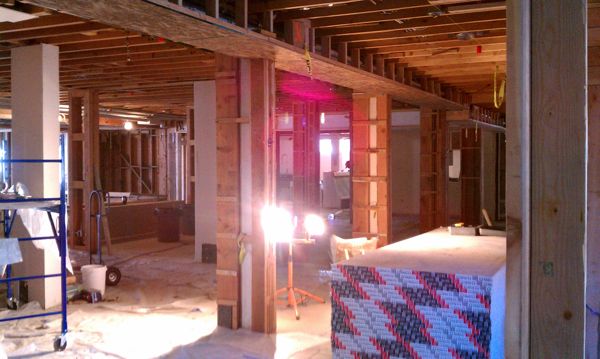 Ground level of Olympic House stripped to the ribs. 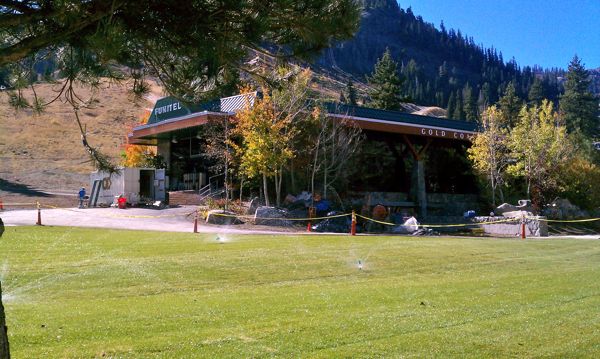 Fresh sod in front of the Funitel where the ticket portals used to be. 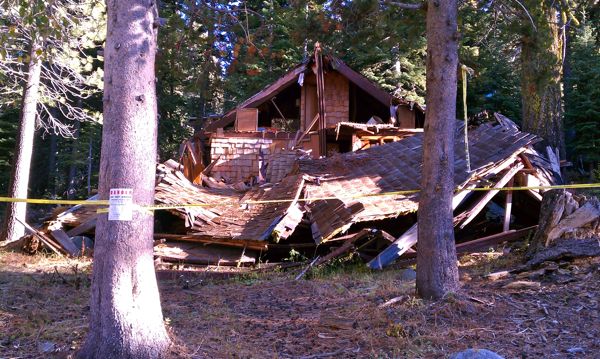 Alpine Meadows residence that collapsed under snow load last winter. A reminder of the epic 2011 season.