Keeping it real at Grand Targhee 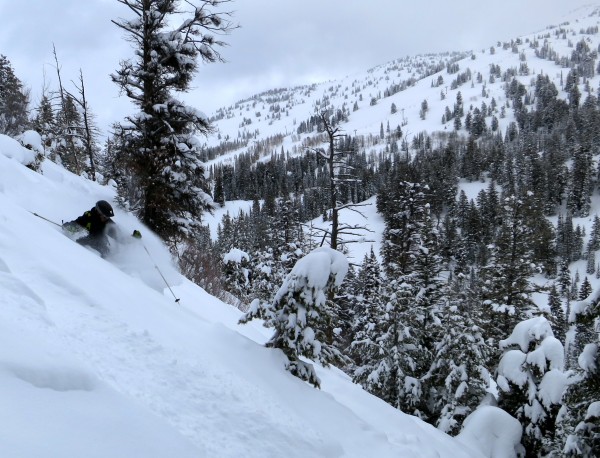 After nearly three sub-par ski seasons in Tahoe, a couple of friends and I finally decided to join the vagabonds and hit the road in search of powder. The plan was to select a date and leave enough flexibility to pick one of several destinations within a reasonable driving distance of Tahoe. We would study weather and snowpack forecasts at different resorts and hopefully zero in on the one with the best possible conditions at the time. We also wanted to choose a less popular destination which would offer more quality skiing with less competition for fresh tracks. We finally decided on Grand Targhee. Located on the western slope of the Teton Range in Wyoming, Grand Targhee had a reputation for good terrain, lots of snow and few skiers. 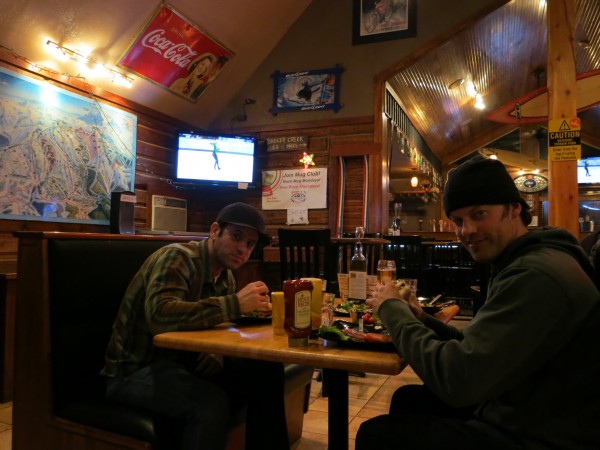 A twelve hour drive from Truckee landed us in Driggs, Idaho. Driggs is located just across the boarder from Wyoming and 2,000 vertical feet below Grand Targhee. The next morning we drove up the pass to the ski area as rain turned to steady snowfall and the snowbanks grew in height with every switchback. It had snowed twenty eight inches in the week leading up to our trip and eight inches new were reported overnight. We got into line at 8:45 with maybe thirty other skiers. Why were they so relaxed? Where was everyone? 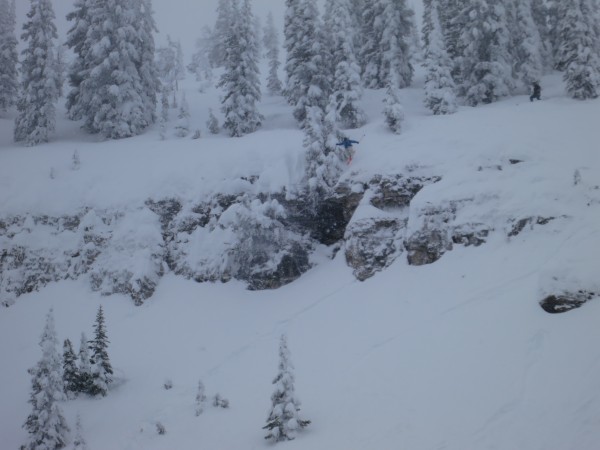 Hucking one of the steeper zones off the Sacajawea chair.

We joined a local contractor called Big Dave on our first chair ride. He told us the dense fog we encountered about half way up was commonplace at Grand “Foghee”. He also said Targhee was notorious for under reporting snowfall amounts. He gave us some directional advice, told us the day was going to be sweet and disappeared into the fog. It took us a few runs to adapt to the snow and wind induced vertigo on the upper mountain but after that followed pure bliss. The upper snowfields were extremely smooth which made the skiing easy once you gained confidence in your lack of vision. As we descended below the clouds, visibility improved allowing us to pick up speed through Targhee’s widely spaced trees, chutes and rollovers. The snow conditions were dense, Tahoe-like powder which allowed for high speed and total control. Sheltered north faces had deep dry snow. Either way, it skied great and we had found what we came for. 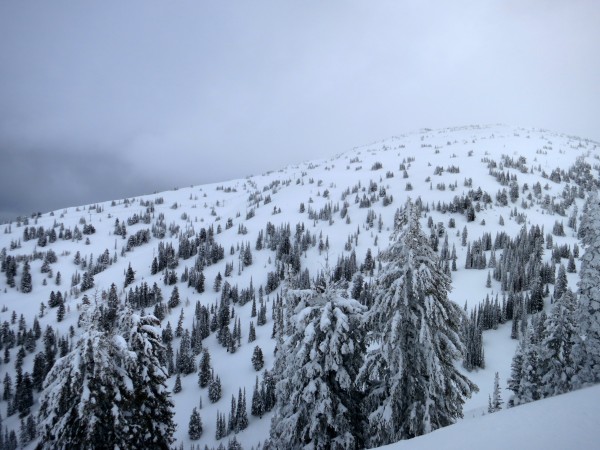 The ski terrain at Grand Targhee is serviced primarily by two high speed quads, Dreamcatcher and Sacajawea. Dreamcatcher runs 2,000 vertical feet to the summit of Fred’s Mountain which offers wide open cruisers and perfectly spaced tree runs ideal for powder skiing. The Sacajawea chair (Sac to the locals) goes about 2/3 of the way up neighboring Peaked Mountain. Sacajawea’s shorter vertical can be advantageous as it’s top station frequently sits below the layer of frozen fog that can hammer the summit of Fred’s. Sacajawea serves plenty of fun cruisers and some of Targhee’s steepest in bounds terrain. When conditions permit, you can hike above Sac to the summit of Peaked Mountain, which offers mellow pow runs to the south and wicked steeps to the north. More great sidecountry can be found on Mary’s Nipple, located between Fred’s and Peaked. If you want to travel back in time, try a few pow laps on the old center pole Blackfoot double chair. Though not the biggest or most challenging ski area, Targhee’s 2,500 acres provides more than enough quality terrain for powder pigs looking to get off the grid.

Perhaps the most alluring part of Grand Targhee is it’s lack of crowds. We were there during a holiday weekend and still pulled into a half empty parking lot each day at 8:30. A few locals mentioned it was the most crowded day of the year despite no line being over five minutes long. More common was the scenario of skating right onto the lift. Apparently midweek days at Targhee can have less than 1,000 skiers at the entire area. 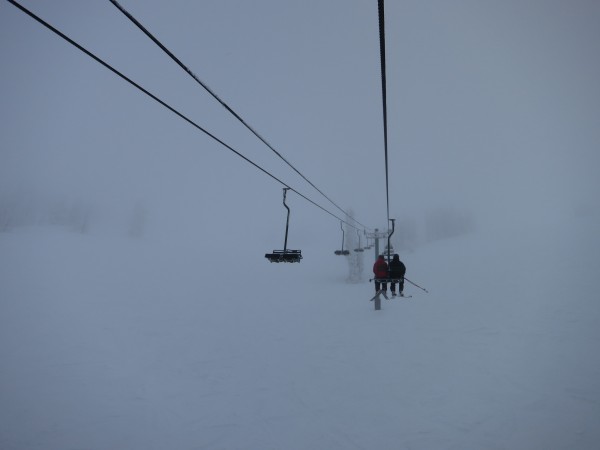 Another hectic weekend at Grand Targhee. 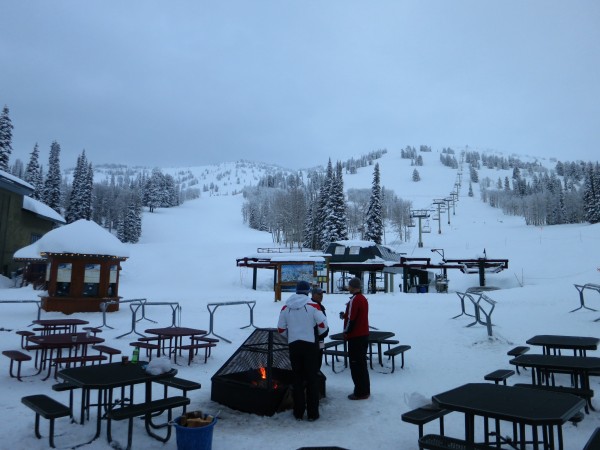 Sometimes the clouds lift and you can actually see the top. 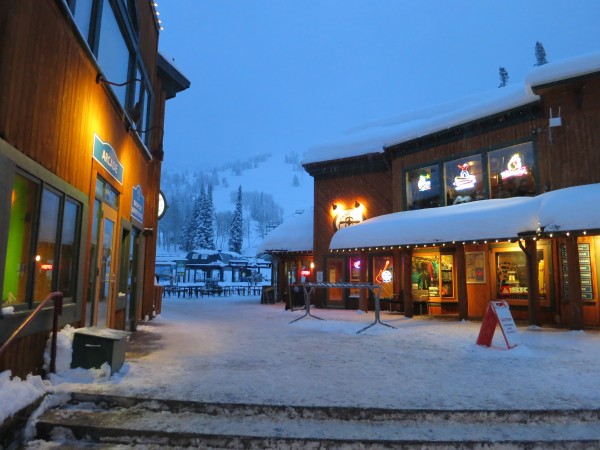 Evening descends on the Targhee Village.

Another key ingredient to Targhee’s mystique is that it always seems to be snowing. Storms hang up on the western slope of the Teton range and dump absurd amounts of snow. Targhee actually receives more snow than it’s legendary neighbor Jackson Hole. It snowed off and on during our entire visit. On our second day the wind kept refreshing tracks so that some of our best runs came after 2pm. After skiing we retreated to the Trap Bar for live music as it continued to snow as hard as it had the entire trip despite nothing being forecasted for that afternoon. A local told us this happens all the time. He had trouble recalling the last half day of sun they had received. 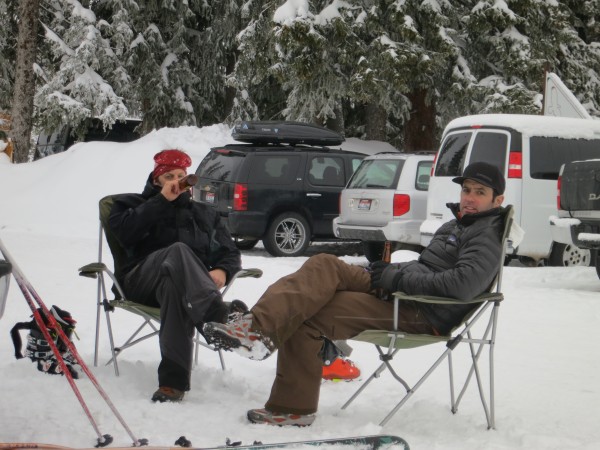 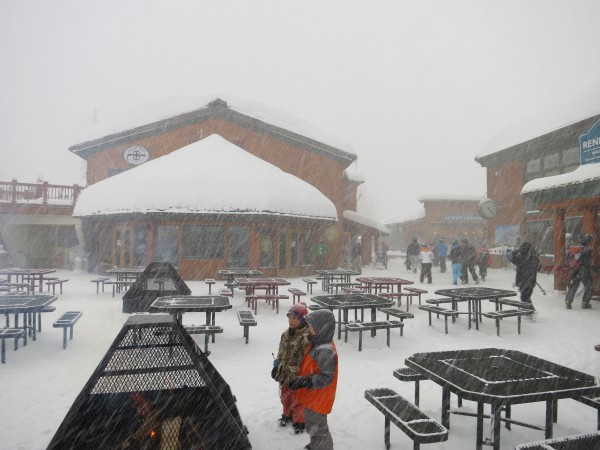 The icing on the cake of our trip was discovering the little things we hadn’t expected. We had one great meal after another. Snorkels deli, located steps from the Dreamcatcher lift, has fresh made breakfast and lunch options. In the town of Driggs we had great Italian food at Tony’s our first night followed by an outstanding meal at Forage Bistro our second night. Apres ski at the Trap Bar featured Shook Twins from Portland who played a dynamic mix of indie rock, folk and even some beat boxing. Targhee locals were beyond friendly everywhere we went. Tailgating in the Targhee parking lot is practically a religion and locals are more likely to offer you a PBR and tell you an insider sidecountry tip than shun you as a tourist. 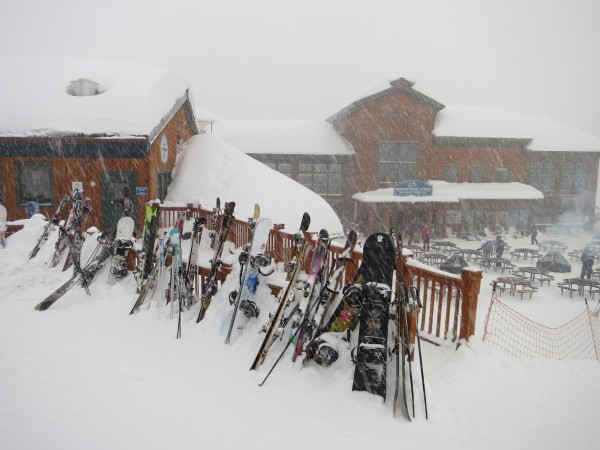 Stay in the Trap Bar long enough and your skis may get buried. 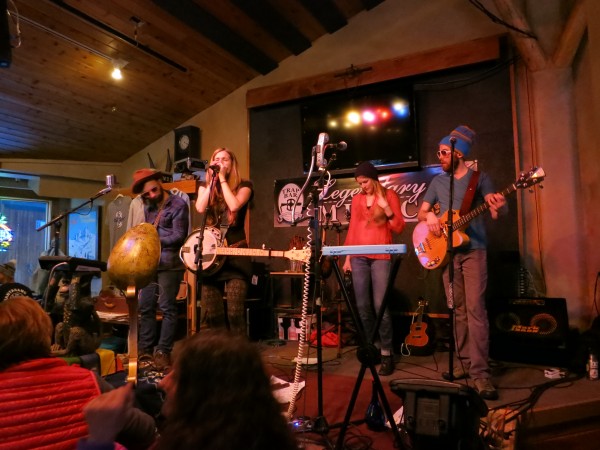 Grand Targhee offers a ski experience rarely found today. The terrain and snow quality live up to it’s reputation among hard core ski bums. Cool locals, great food, and the down home charm of Targhee and town of Driggs take it to another level. If you find yourself missing something in your current ski scene or merely want to chase a snowstorm into the wilds of Wyoming, you should check out Grand Targhee.