KT and Headwall were loading at 8:30 on the dot this morning and a handful early birds, myself included, had the mountain to ourselves for about and hour and a half. Temps were in the single digits, but the sun was bright and the views were spectacular. I rode KT to Headwall and eyed the Palisades from there. Completely pristine, they had not been open since before the recent storms. It’s a holiday week, so I didn’t expect them to open, but decided to ride up Siberia to get a better view. At the top of the lift, I saw the blue “Palisades Open” sign and no one hiking up. Barely believing my good fortune, I started the hike. Looking down from the top, I could see that no one had started up yet. Because of the cold weather, south-facing aspects are still holding powder, and I decided to ski the Kitchen Wall, the steep southeast face that goes down into Sun Bowl. I got two fresh laps in before Patrol closed the Palisades around 10am. 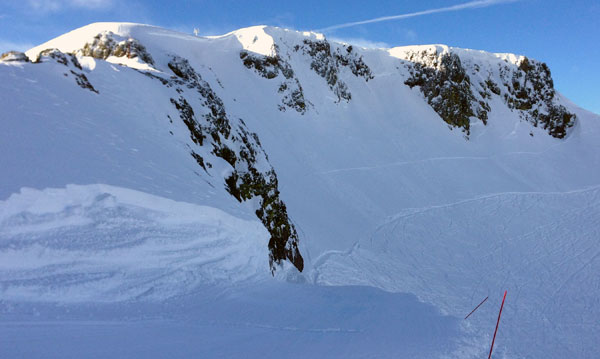 The Moon, I Mean the Top of the Palisades.

Later in the morning, I skied over to Granite to check out the peak. Also pristine, but with a huge slide having ripped out the middle, Granite Peak was not open. By 11 the crowds were thick and the lift lines long and I skied down the sunny side of the mountain run and called it a day.